My eighty-eight year-old mother and I live in Central New Jersey, not far from the ocean, the mountains, the airport and New York City.  My sister lives in Oregon, and has been fortunate enough to travel throughout the United States, Europe and the Caribbean, so I’ve been helping my mother since my Dad passed away in 1986.  Mother suffers with vascular and Lewy body dementia; she has trouble walking and cannot care for herself.  Her memory is moderately good on some days, but on others she doesn’t remember who I am without coaxing.  About five years ago, she moved into my home;  I became a part-time caregiver, and then a full-time one after retiring from my job in 2013. 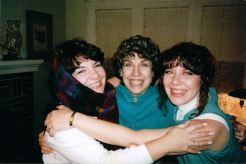 Singing together – Mom with Andrea and me

I promised her that I would never send her away to a nursing home.  I worked in one during the months between High School graduation and college, and although the employees in these homes are very caring people, in the end it is often  just a job to them.  People with memory issues can be a real test. That summer was quite an education for me and I am very glad that I had that experience!  When I brought Mom to live with me, it was with both eyes open as to what I might encounter down the road as a caregiver.

I also gave her my word that her religious beliefs would be upheld.  My mother has been a Christian Scientist since she was a teen, and true to her belief, has not used a doctor or medicine since my younger sister was born. When I say ‘medicine’ I mean no vitamins, antibiotics, pills, potients or ointments – nothing. She wouldn’t even accept a cup of herbal tea if you said it was to alleviate a problem.  Just for the record, before becoming a Christian Scientist, my mother was often very, very ill as a child, had several surgeries, and in fact was born dead.  The doctor who delivered her at home had to put her into warm and cold water several times to revive her!

Being raised in a family that believed wholly in the power of God to cure bodily ills was difficult for me, although my parents and others close to me experienced metaphysical healing that influenced me greatly.  I seemed to be in a place between two worlds.  When my own children were born, I was not only reluctant to rely totally on prayer, but also hesitant to follow the advice of doctors and well-meaning friends. I had to find my own way, and so I self-educated myself on both methods.

Along the way I came to understand how present day ‘doctoring’ has taken a detour from what it originally was intended to be.  The bedside manner of my youth and earlier times has taken a back seat to the reliance on pharmaceuticals, scans, tests and large corporate medical entities. Somehow our culture has lost the knowledge our forefathers had about birth and life and death, and we live in constant fear of the unknown, which is somewhat assuaged by large insurance premiums.

Over the years, people such as Deepak Chopra, Dr. Wayne Dyer and others like them (starting with Aristotle) have promoted much of the same metaphysical ideas that I grew up with.  It was easy for me to understand the power of belief as they taught it, but for me, something was still missing.  I became fascinated with the skills of ancient healers and herbalists.

I reconciled my dilemma by studying Natural Health / Hygiene which was promoted through the 19th and 20th centuries by Herbert M. Shelton, Dr. Isaac Jennings, Norman Walker, M.D. and others, and more recently I’ve learned from Dr. Mercola’s and similar websites.  I took formal instruction in 1994 from the College of Natural Hygiene and which I consider as valuable as my Bachelor’s Degree from Rutgers University – at least in practical terms.  All in all, I have over fifty years of experience in holistic and nutritional health and decades of independent study of biochemistry and natural healing.  That, coupled with an innate desire to learn and to question what I am told has led me to the point where I now find myself:  Confident that I will be able to care for my mother, in my home, for as long as necessary.

The backbone of my conviction is a lack of fear and the firm belief in the wisdom of Nature, the intelligence of the body and the need to live healthfully by embracing the following principles*:

This is the road map for healthy living.  These are the rules we endeavor to follow.

I was a full-time home caregiver to my mother, who suffered from Lewy Body with Dementia. This blog is about my five -plus years of experience with her, using Natural Health and non-medical care solutions and products. Bread Madness is the title of my upcoming book on the role of nutrition, natural health and biochemical elements on behavior in the Elderly.

My Other Blog: Hillary Volk, Invoking the Muse

I’ll always be a tree-hugger.

Armed With The Truth, United We Stand And Actively Take Back Our World • Truth11.com independent media news site is dedicated to the truth and true journalism • The truth will set us free

Journey From A Polish Kitchen

T3 Test Blog
Get On With It

Writing and drawings about work, family and the stuff in-between

'Growing old is mandatory; growing up is optional.' Chilli Davis

A Dollop of History

Helping families one family at a time.

Energy Focus for Everyone

You control your energy use

The best of England and Japan

Exploring Bristol and beyond

Trunk of Thoughts
The Dope Bohemian

Are you ready to live your dopest life?

Recipes showing step by step directions with pictures and a printable recipe card.

Devotionals on A COURSE IN MIRACLES, A COURSE OF LOVE, THE WAY OF MASTERY, CHOOSE ONLY LOVE, and MIRARI . . .with Celia Hales

Your go-to equipment rental facility in the Indianapolis area. "Don't be a tool - Rent one."

Caring for those with dementia and their caregivers

Mark All My Words

A Slightly Different View of the World

The latest news on WordPress.com and the WordPress community.

Editor in Northern California. Interested in tiny things, nineties nostalgia, old jungle mixtapes, punctuation, and my cats. Not to be fed after midnight.

A blog about the guilt, frustrations, humor and sweet times that come with caregiving with a focus on Parkinson's and Alzheimer's.